Considered by critics as the first African American to break into the mainstream contemporary art world, Romare Bearden was an artist and writer best known for his collages. On his life and work, biographer Ruth Fine called him “a well-read man whose friends were other artists, writers, poets, and jazz musicians, [and] Romare minded their worlds as well as his own for topics to explore. He took his imagery from both the everyday rituals of African American rural life in the south and urban life in the north, melding those American experiences with his personal experiences and with the themes of classical literature, religion, myth, music, and daily human ritual.” 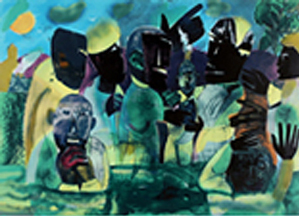 Uponmoving with his family to New York’s Harlem neighborhood, Bearden was surrounded at an early age by artists of the Harlem Renaissance. He studied at Lincoln University, Boston University, and New York University, graduating from the latter with a degree in science and education in 1935. After college he worked under the German artist George Grosz at the Art Students League, and was introduced to the Dadaists and collage work. As a means of support,Beardenoften contributed political cartoons to various African-American newspapers. 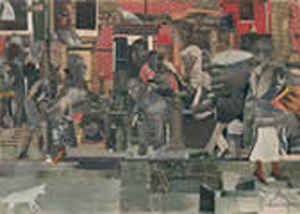 The Dove, magazine and newspaper clippings, gouache, pencil, and color pencil on cardboard, 1964

Influenced by the style of the Mexican Muralists including Diego Rivera and José Clemente Orozco, Bearden’s early art portrays life in the American South and highlights the importance of unity and cooperation within the black community. The Visitation, a painting from 1941, depicts the comradery between two black women as they hold hands and references the iconography of The Visitation of Mary and Elizabeth as described in the Gospel of Luke. 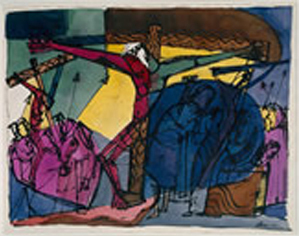 After a serving in the Army during WWII, Bearden traveled to Paris on the GI Bill and studied art history and philosophy at the Sorbonne. As he struggled to convey human emotion, his artistic style changed and became increasingly abstract. A series of paintings from this time depicts scenes from the Passion of the Christ via abstract shapes and colors. Interested in exploring human values and reactions, Bearden focused on the emotions of the crowds who witnessed the Passion instead of Christ himself. In Golgatha, the Crucifixion is painted in the center of the composition and is surrounded by onlookers in a blur of purple and blue. Contemporary with other avant-garde images of historical events, including Robert Motherwell’s commentary on the Spanish Civil War and Jackson Pollock’s work with Northwest Coastal Indian art, these biblical scenes depict humanity during times of great crisis. 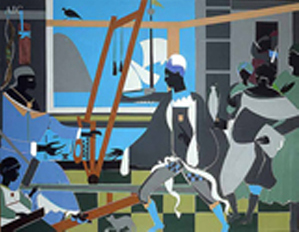 The Return of Odysseus, collage on Masonite, 1977

In the 1960s Bearden founded the Harlem-based art group The Spiral, which sought to discuss the role of African American artists in the contemporary world. Concurrently, he abandoned painting and began working in collage. Given the tumultuous political climate of the 1960s, his work became increasingly socially conscious and he used contemporary media, including magazine clippings, to portray his messages. Although his art continued to focus on black America, he disagreed with a statement made by the Chicago arts organization The Harmon Foundation, which said that African American artists should focus solely on their own culture. The Return of Odysseusis one reaction to this mindset, as it demonstrates Bearden’s pursuit of breaking down racial stereotypes. Based on the ancient poetry of Homer, the collage depicts Odysseus and his wife Penelope as black figures in an attempt to defeat standard racial roles and comment on the potential of African Americans. 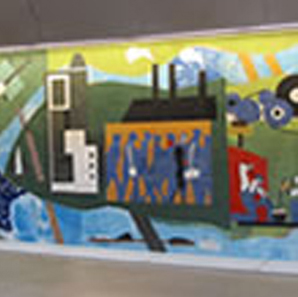 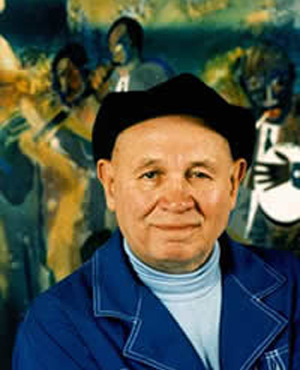 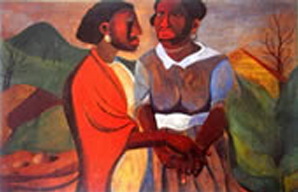 Retrospectives of Bearden’s work have been held at the Museum of Modern art in 1971, the National Gallery of Art in 2005, and the Michael Rosenfeld Gallery in 2011. There is current debate regarding his 60′ x 13′ painted tile mosaic in the Pittsburgh Gateway Center subway station. The mural, valued at more than $5 million, is worth more than the transit system itself, and as such authorities are not able to ensure proper conservation and security of the work.

If you believe you own a work of art by Romare Bearden, contact Art Experts. We authenticate, appraise, research and provide Certificates of Authenticity (COA's) for works by Romare Bearden.