Get a Kelley Certificate of Authenticity for your painting or a COA for your Kelley drawing or sculpture.

For all your Kelley artworks you need a Certificate of Authenticity in order to sell, to insure or to donate for a tax deduction.

How to get a Kelley Certificate of Authenticity is easy. Just send us photos and dimensions and tell us what you know about the origin or history of your Kelley painting, drawing or sculpture.

If you want to sell your Kelley painting, drawing or sculpture use our selling services. We offer Kelley selling help, selling advice, private treaty sales and full brokerage.

We have been authenticating Kelley and issuing certificates of authenticity since 2002. We are recognized Kelley experts and Kelley certified appraisers. We issue COAs and appraisals for all Kelley artworks.

Our Kelley paintings, drawings and sculptures authentications are accepted and respected worldwide.

Each COA is backed by in-depth research and analysis authentication reports.

The Kelley certificates of authenticity we issue are based on solid, reliable and fully referenced art investigations, authentication research, analytical work and forensic studies.

We are available to examine your Kelley painting, drawing or sculpture anywhere in the world.

You will generally receive your certificates of authenticity and authentication report within two weeks. Some complicated cases with difficult to research Kelley paintings, drawings or sculpture take longer. 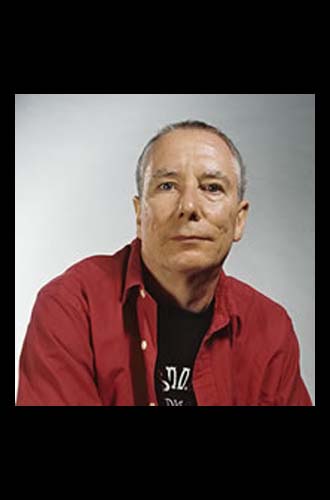 Contemporary American artist Mike Kelley is known for his works that combine a wide variety of objects, including sculpture, textile, drawing, painting, photography, collage, video and sound installations, writing, found objects (most famously stuffed animals), and photocopies. Set up in galleries and museums, these installations were meant to be interacted with, and performance was a often a key component of Kelley’s work. As art critic Jerry Saltz claimed in 2005, Kelley’s pieces were indicative of the “clusterfuck aesthetics,”or overstimulation of media commonly found in contemporary art. 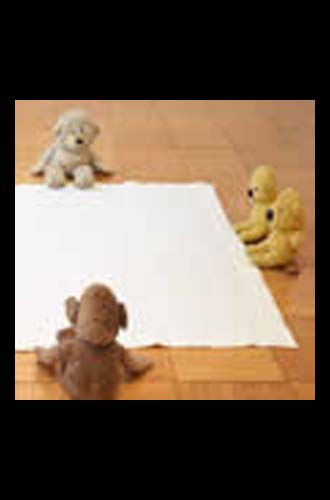 As a youth, Kelley was a member of the band Destroy All Monsters in Wayne Michigan, his hometown. Born to a working class family (his father was the head of maintenance for the local school district and his mother was a cook), the artist’s upbringing and involvement in the Detroit underground music scene influenced his work. Throughout his career he explored themes of repression, class, politics, and gender, and his art brought upquestions about normality and perversion. In his later work, biography and autobiography became increasingly important. 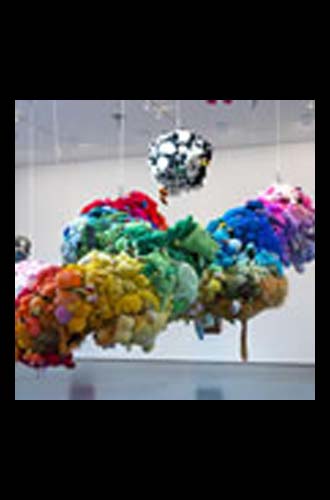 Kelley received his BFA from the University of Michigan in 1976. He then moved to California and graduated from CalArts with an MFA in 1978. Inspired by his instructors at Cal, including John Baldessari, Laurie Anderson, David Askevold, Douglas Heubler, and Jonathon Borofsky, Kelley became part of the Los Angeles art scene, and in 1979 his mixed-media performance Poltergeist in collaboration with Askevold gained critical attention. 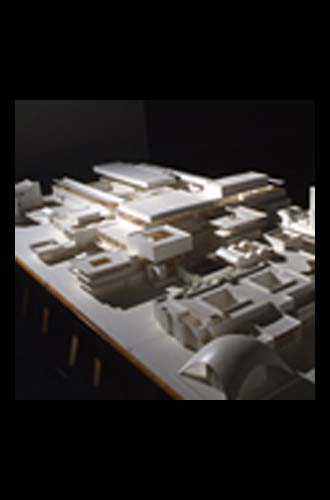 Using a variety of textiles and stuffed animals, Kelley’s work in the 1980s was predominantly satirical and represented the investment of love and devotion people give to these objects. One of Kelley’s stuffed animals appears on the cover of Sonic Youth’s 1992 album Dirty. The band had previously collaborated with the artist and provided music during an hour-and-a-half recitation of the poem Plato’s Cave, Rothko’s Chapel, Lincoln’s Profile. 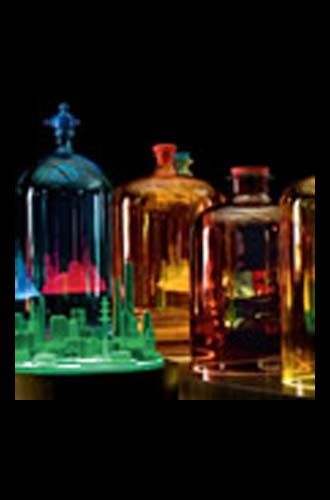 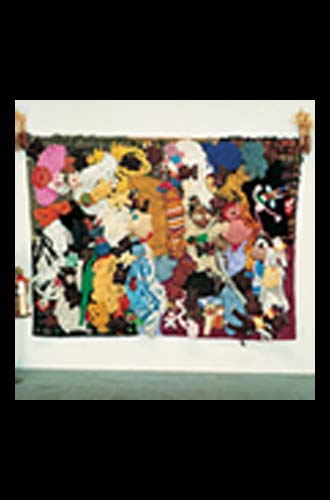 Move Love Hours Than Can Ever Be Repaid and The Wages of Sin, mixed media including stuffed animals and crochets blankets, 1987

Inspired by pop culture, one of Kelley’s last works was a collaborative sculpture series entitled Kandor, after the city on planet Krypton from which Kal-El, or Superman, escaped. On January 31, 2012, Kelley was found dead of an apparent suicide.Coming together through Facebook, his fans organized and recreated one of his famous works, More Love Hours Than Can Ever Be Repaidbetween February and March 2012 in a parking lot near the artist’s studio. Retrospectives of Kelley’s work include exhibitions at the Whitney Museum of American Art (1993), the Museum of Contemporary Art in Barcelona (1997), the Tate Liverpool (2004), and the Stedelijk Museum in Amsterdam (2012).